“Perhaps most unexpected, running shoes designed to somehow “fix” someone’s running form turned out often to be ineffective and even counter-productive.”

Shin splints, patellofemoral syndrome (aka runner’s knee), a broken toe, stress fracture of the foot, a sprained ankle, a strained piriformis, sciatica, chronic hip and sacroiliac pain…and this list only covers my lower half!

Mine is a body that has sustained and, thankfully, recovered from numerous injuries.

With the exception of fracturing my foot after jumping cross-legged off a cement post when I was 8 (and apparently crazy), I can trace all of my physical dysfunctions and subsequent recurring pain back to the three years I spent on my high school track team hurling a shotput and discus across fields. I suffered the consequences of overuse and repetitive stress from being under-coached and under-conditioned (the inequities in girls’ training and conditioning in sports is a topic for another post) well into my 30s.

No single pair of shoes or orthotics — whether those prescribed and specially-designed for my feet by two different podiatrists as well as the “over-the-counter” from a footwear store — successfully resolved my bouts with pain. I’d get temporary relief then the pain would resurface and continue migrate between my traumatized body parts (shoulder, hip, sacrum, leg) with varying levels of intensity and duration. Finally, two years after pregnancy, childbirth, and the ensuing exertions of parenting had magnified these strains, I could no longer live with short-term fixes that only addressed the afflicted area of the moment.

I needed and ultimately benefited from a holistic approach to rehabbing my body. I worked on realigning my pelvis; strengthening and stabilizing my deep core muscles, hips, shoulders, and feet; mobilizing strained tissues with massage; and maintaining/returning to a neutral posture throughout my day.

I’m not saying that shoes aren’t a factor at all. But I don’t think it’s a wise practice to focus so much on what we put on our feet while neglecting to pay attention to how we take care of our feet and the rest of our body.

Full disclosure. I’m a skeptical/mindful consumer and am fully aware that shoe companies have a vested interest in our buying new shoes every few months. So I challenged my own rehab doctors with questions about the validity of the commonly circulated advice to swap our running shoes out after 300 – 500 miles. The response was non-committal — it may be more of an individual choice based on one’s biomechanics and how quickly they wear down shoes.

My bottom line.
Be the expert of your own body! Become fluent in the messages it relays through sensations of pain, fatigue and imbalance as well as those of strength, freedom of movement, stamina, and well-being. Keep testing out what’s true for you!

Read more about the research on biomechanics and running shoes via the NYTimes.com: Choosing The Right Running Shoes. 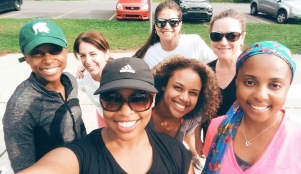 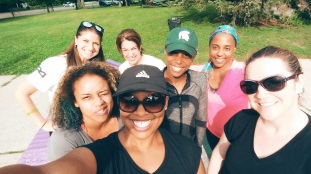 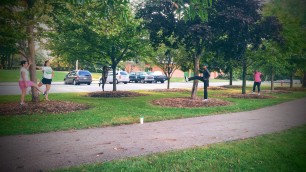 We’re so thrilled to have launched the pilot session of our new walk-to-run program TrailBlazers last Monday!

The day began stormily with hourly forecasts that nerve-wrackingly shifted bouts of rain to land before, during or after our scheduled meetup time.

Alas, finger-crossing and fervent hoping prevailed (despite the afternoon flash flooding around town)! The skies calmed, the sun burst through, and the streets dried up so that we could blaze a new trail with this great crew of women.